New for 2022 Llama Keeper with our latest addition at Hensting Alpacas, Primrose the llama had a baby Primrose is nearly 5 yrs old at the time of writing (September 2021) and has been trained over the winter months of 2018-19. This year Primrose has had her first baby Piper so you will get to look after Piper. Unfortunately, Primrose is so strong now we have had to take her out of circulation as he can be quite grumpy. Piper will now take her place and is so excited to meet you! Children must be accompanied by an adult 1 child and 1 adult = 1 ticket you cannot leave 2 children without an adult

Come and be the keeper at Hensting Alpacas.  You will have a member of staff totally to yourselves. You will accompany them around the farm and muck in with the jobs as follows:

How do I look after the Llama?

The gates close at 08:55am so please do not be late as we are a long way away from them by 10am2 people 1 Llama £80 inc vat Special 09:00 am - 12pm Book carefully Cancellations or moving dates are not accepted

Or from Brambridge Park gardens, turn left out of their gates, travel over 2 hump bridges and you will see a lay-by on left with tall iron gates (if you go under the railway line, you have gone too far). A representative from Hensting Llamas will be at the Parking facilities are on site and you will be directed where to park from the entrance gates.

Wellington boots are available to hire when it is muddy

Here are some interesting Llama facts you may not know:

During the walk, feel free to take pictures of the animals and of the natural scenery; we also take lots of pictures and post them up to our social network sites, since those who have already visited us or enjoyed this walking adventure, often ask us to post new pictures of ‘their Llama’, whom they somehow miss even after just one meeting! Indeed, many families return time and time again, building a friendship with us and a very special bond with the Llamas

Llama or Alpaca - Do I Eat It or Wear It?

When you see Peru, there are four camelids you will see: the vicuna, guanaco, llama, and alpaca.  They are so called because they are essentially camels with no hump.  Vicunas and guanacos are normally easier when it comes to spotting the gap, but people can struggle with llamas and alpacas.

These creatures have four things in common coats, long pointed ears, thick lashes, and massive eyes.  And watch out... like camels, they could spit although they're more inclined to do this at each other instead of at humans.

Llamas are the largest of the four and can weigh 136 kg or up to 300 pounds.  In Peru, they are primarily used as pack animals and for their wool.  Males carry 175 or up to 80 kg pounds for a day's march.  In Bolivia, these creatures are also often eaten.  Their droppings may be used as a source of fuel.

Interestingly, I recently read an entry on llamas that says they're being used for therapy, as they are soothing and tender with docile temperaments.  Which fascinates me because, as far as the ones I encounter on the streets of Cusco, the main word I would use to describe them is cranky.  Although not friendly to most, they are extremely obedient to their owners.  Granted, this may have something to do with being dragged around the stone streets waiting for visitors to take photos.

They learn new things and are animals that are intelligent.  They are sometimes used as guard animals as they are capable of learning the difference between creatures like dogs and coyotes.

Concerning determining whether is a llama or an alpaca, if it with an indigenous person in a brightly colored outfit who asks you in case you'd love to have a picture, it a llama.  If you see them out it harder to tell if they don't side by side.  Llamas are larger.  While those of the alpaca is straight, their ears are curved.  The backs of llamas are straighter than those of alpacas.

Llamas appear to descend from the guanaco, a South American camelid.  From the Incan empire, both llamas and alpacas were often sacrificed in rituals.

Smaller than llamas can weigh up to a bit less than 80 kg or up to 175 pounds.  They are prized for their wool that is of finer quality than that of the llama.  They are too small to be used as pack animals.  They are prized in Peru for the meat quality.  It's high protein and low in fat and cholesterol yet very flavorful.

These creatures are descended from the vicuna and thrive in areas that are dry and in high altitude between 3900 and 4800 meters.  The quality of their wool suffers as a result if they're kept at elevation.  Although quite soft, the wool is also very strong, stronger than that of the Merino sheep.  A particular breed called the Suri has hair that is thicker, longer and finer than that of the alpaca.  There are 22 colors with a range of variances beyond those. 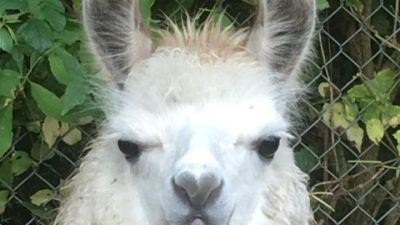 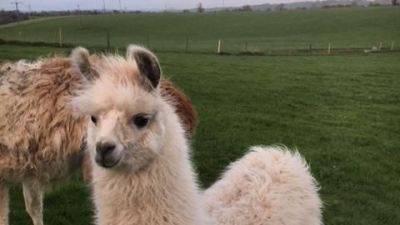